It was just after 5pm, and I was pacing back and forth in my apartment, trying to watch a movie.  The concert didn’t start until 8pm, and I was attempting to exercise some patience.  Then I thought to myself:  “Fuck patience.  And fuck exercise, too!”  I grabbed my ticket, some cash for swag, and my ID.  I ran out the door, jogging (not walking) towards the theater where Agalloch was going to play.

Normally I wouldn’t stand in line for two-and-a-half hours to see a concert.  Now days I’m more content to hang back and enjoy the music with a cold beer in my hand.  But Agalloch isn’t just some nominal band rolling through town, and this wasn’t going to be just another show.

The concert was at Denver’s Bluebird Theater.  An official historical landmark, the brick building is one year shy of being a century old.  It was once a movie house, and its maximum capacity is only 500.  This creates an intimate atmosphere between the crowd and the band.  Best of all, it’s only a fifteen minute walk from my apartment. 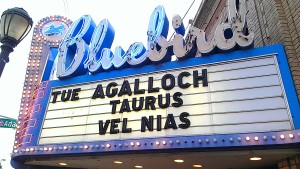 There were only a few people at the door when I arrived.  We chatted about metal, memorable concerts (mine was Depeche Mode at Red Rocks), and how this was the first time any of us were going to see Agalloch live.  Soon I saw Aesop Dekker and Don Anderson walk out the front, lighting up cigarettes, though they kept their distance from the growing line of fans.

The doors opened at 7pm, and I made my way to the front of the theater.  I snapped a few pictures of the interior architecture:  Tall marble columns and long, flowing crimson curtains along the walls.  Between the columns were bowl-shaped light fixtures with intricate designs carved into their surfaces.  Mounted to the front of each fixture was what looked like a demon mask—white faces with malevolent smiles and black holes for eyes.  Something a shaman would wear from some ancient, forgotten civilization to frighten off disease.

The band Velnias from Boulder, Colorado took to the stage first.  They reminded me of Morgion, with slow, doomish tempos building and growing until a fortification of frenzied black sound came crashing down on our headbanging heads, pulverizing the skulls of the hapless crowd with primal screams, explosive riffs and devastating drum beats.

Taurus followed, slowing things down with muddy, morose guitar playing.  Guttural screams pushed against the walls from the throat of the female lead singer, punctuated with frantic, feral drum fills.  I feared the drummer’s body would fly apart as she played, her performance reminding me of Animal from the Muppets (which is a huge fucking complement).

Finally it was time.  Smoke and darkness rolled onto the stage as John Haughm came out holding a single candle.  The entire theater grew quiet, and I swear those pagan masks turned their faces toward the front as Haughm lit the signature incense that starts each show, the soft light from the candle illuminating his face with a soft orange glow.

The aroma filled the air: rustic, saccharine, earthy.  Soon the rest of the band members donned their gear, and the opening riff to “Limbs” spilled out of the large speakers.

Being a former drummer, I watched Dekker closely.  His performance was flawless and intimidating.  Though he was tucked away in the back of the stage, his volatile drumming carried through the venue, threatening to knock over those marble columns.

They played their latest song, “Faustian Echoes,” and the horde became unglued, starting a short-lived mosh pit before the song slowed.  You’d swear Agalloch sold their own souls to Mephistopheles to play so brutally and beautifully at the same time.

One of my favorites followed, “Bloodbirds.”  That eerie lead guitar winding its way through the percussion and bass as Haughm screamed into the microphone, “the god of man is a failure!”

To everyone’s elation, Agalloch played several pieces from Pale Folklore and The Mantle.  When “In the Shadow of Our Pale Companion” filled the auditorium, I tried to film the performance with my phone.  But at around the 11:30 mark, the band members become blurred images in the clip as I slammed my head forward.

And I swear those pagan masks on the walls were doing the same. 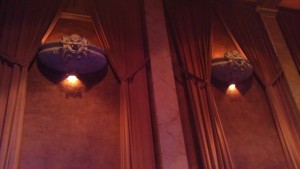 Agalloch has a reputation for putting on a memorable show, and their first concert in Denver was no exception–superlative, vicious, august.

When it came to an end, the multitude screamed for an encore, but the lights stayed on.  I blame the high altitude with its thin air, because the crowed was ravenous for more.  We would have stayed for another set.  Two sets.  The rest of the fucking week.

Before I left The Bluebird, with ears ringing, I bought a t-shirt with the lyrics to “Black Lake Nidstag” printed on the back.  Then I bought a second t-shirt referencing “Faustian Echoes.”  Then an Agalloch patch.

Then I ran out of the theater before I emptied out my bank account paying homage to these pagan metal deities who descended upon the mile-high city and were made flesh, gracing for one night a hand-full of fanatical Coloradans with their Cthulhu-like providence. 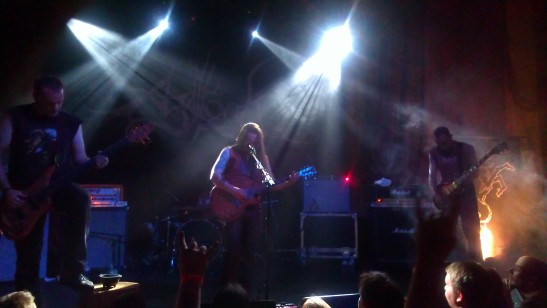